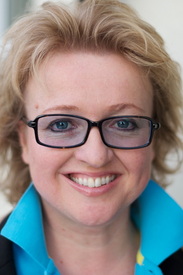 Anne-Marie has been working as a voice teacher to actors and singing teacher for almost 25 years.  Her varied and extensive practice includes working with classical actors, international film stars, artists in national theatre companies, leads in West End musicals, actors in film and television and platinum selling pop artists.

She acts as a vocal consultant to West End production companies, major agents as well as individuals, working as a trouble-shooter and problem solver in both speaking and singing.

She is also one of the most experienced teachers and trainers of the Estill Model in the world and was trained by and interned for Jo Estill many times. She was the first UK teacher to be asked by Jo Estill to intern for her in Denmark in 1994 and continued her close association with Jo Estill from that time. She has pioneered the use of the Estill Model in the teaching of actors, and specialises in the integration of speaking with singing, especially musical theatre.

She established The Voice Explained (Anne-Marie Speed & Associates) in 2001 and the inaugural course was the last one in the UK at which Jo Estill presented. She regularly runs popular workshops in Voice, Performance and the Estill Model and is much in demand to give workshops on the Estill Model, performance and related vocal subjects internationally. She has also been Professor of Voice on the Musical Theatre course at the Royal Academy of Music since the course started in 1994 and was President of the British Voice Association 2001-2002.

During this time, she has also established herself as one of the UK’s leading accent coaches, working on major films, TV shows and West End productions.

As a theatre director, her work includes drama and musicals and she was the first director to direct a new production of the West End hit ‘Stones in his Pockets’ for a tour of the Gulf in 2004. This was followed in 2005 with a production of ‘Art’ by Yasmina Reza and ‘Into the Woods’ by Stephen Sondheim for the Royal Academy of Music. In 2008 she directed Sondheim’s ‘Company’, and in 2010  ‘A Little Night Music’ also for the Royal Academy of Music.

Since 2009 she has worked as a vocal consultant for Sony Records and SyCo and recently Universal.

She was recently the Company Voice, Singing & Dialect coach for Sir Tim Rice’s new musical ‘From Here to Eternity’ which opened at the Shaftesbury Theatre and the Menier Chocolate Factory revival production of ’Candide’.
She has recently been working on a new ITV drama about Cilla Black which was screened  in the autumn.

Her book on voice training will be published next year.