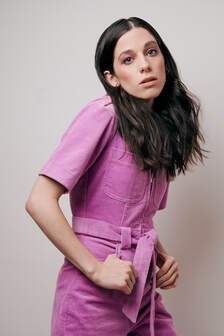 (she/her) is an actor, filmmaker, and director, currently starring in Dear Evan Hansen as Zoe Murphy.
​Her favorite theaters she's performed at are the American Repertory Theater, The Kennedy Center, and WP Theater.

TV: Law & Order SVU, the upcoming series, Dead Ringers (Amazon) opposite Rachel Weisz. She has recently directed RITUAL for MTC and various music videos for members of the Broadway community.

Currently, her short film, Down By The Water, is in post production and plans to make the festival circuit this Spring.