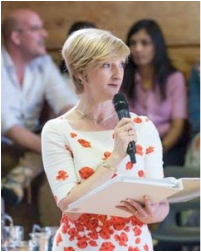 Holding Fellowship status in both genres, she is also a member of the teaching Teams in both faculties. Lecturing on the Tap grades, as well as revised Advanced 1 Modern syllabus. She has also lectured at the ISTD Summer School in Chichester. Jackie jointly organizes the ISTD Janet Cram Awards.

She has conducted the classes for the competition as well as adjudicating the competition.
She is currently the Head of Teacher Training at ACS Dance Centre, DDI coordinator at Performers Dance College and runs her own dance teacher training courses from the Hildale Academy of Performing Arts, covering DDI, DDE, Licentiate & Fellowship. She completed a post-graduate ‘Certificate in Education’ in the post-compulsory sector at the Institute of Education, London, where she specialized in the training of dance teachers. Her reputation in this area has resulted in students from many countries travelling to the UK to attend her courses.

As a professional dancer, she worked extensively in Europe and America with many top choreographers; appearing in numerous television productions, summer seasons, cruise liner shows and pantomimes. Notable amongst her many professional performances were the VE Day Celebration Concerts in Hyde Park in the presence of the HM The Queen, working with such stars as Dame Vera Lynn, Sir Cliff Richard, Michael Ball and Elaine Paige. She regularly worked for TV choreographers such as Brian Rogers, Dougie Squires, Anthony Johns & Ray Cornell.