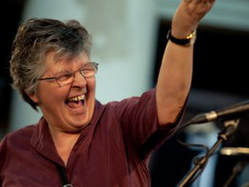 laka d is a singer, piano player, composer, choir arranger and director. Raised in a musical family she escaped the convent and ran away to join a band as soon as she could; bands such as ‘The Entire Population of China’ and ‘Soulyard’.

In the 80’s she was a member of all women jazz and latin group ‘The Guest Stars’,
touring many parts of the world and releasing three independent albums. Out of the melee of fantastic women musicians active at that time came ‘The Lydia D’Ustebyn Swing Orchestra’, a remarkable 13 piece ensemble, also’ The Hipscats’, a 5 part jazz vocal group.

In the 90’s Laka worked in theatre, writing and performing in many shows with Split Britches, Bloolips and Gay Sweatshop.

She began teaching in 1989 – beginning a commitment to vocal arranging and direction.

She has done many festivals with children’s choirs at the Southbank Centre and across London.

​Her current choir is 25 piece ‘Bloomsburys.