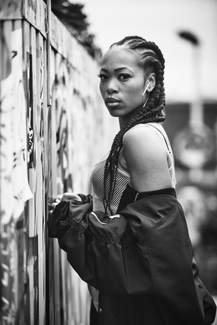 Choir Director and Vocal Arranger, Toni Robinson has enjoyed an extraordinary start to 2018; having been commissioned to lead a bespoke gospel choir for pop act Bastille's as part of their UK and European "Re-Orchestrated" tour.

Prior to that, Robinson has enjoyed ongoing success with her interactive game show Gospeloke (in collaboration with It's Unknown Entertainment).  The show for which she is musical director, launched in 2014 and see's her leading a 30-piece gospel choir as "backing" for willing karaoke participants, in every setting from some of Britain's biggest festivals to corporate events.  2017 saw them featuring in supermarket giant Sainsburys' Christmas TV & Radio campaign.

​Toni started her directing career leading community choir network Singology, as well as teaching for TheatreTrain and in formal Education.  She now spends her time when not with Gospeloke providing backing vocals for some of the UK's biggest acts including Rita Ora & Shaun Escoffery as well as running urban contemporary gospel ensemble, The BASSnote Collective..